“Gham nadaari boz bekhar” was the Persian title of one of Patras Bukhari’s Urdu masterpieces. In the days of Patras, Persian had great influence on Urdu literature. The title simply means; “if you don’t have any worries buy a goat”. It was an amusing account of how the life of a simple babu (office clerk) gets plagued with unnecessary inconveniences after he buys a goat for… what else, nutritional benefits of goat’s milk.

The proverbial goat in the life of Naveed Gilani was an old motorcycle, Triumph TRW, vintage – 1955, the year of my birth.

My love affair with bikes started early in life. I believe it was Steve McQueen’s intrepid bike ride through the rolling hills of Fussen in the Austro German countryside chased by the German soldiers on their bikes, some with sidecars. Those climactic country scenes from the 1963 movie, The Great Escape, are eternally etched in my childhood memory. Yes, Virgil Hilts, Steve’s nom de guerre, was riding a TT Special Triumph 650 painted olive drab and not a wartime BMW. The rigid frames of the BMW would not have taken the punishment of the speeds which Virgil was running at. I was nine when I first saw that great movie and discovered that something other than girls could also send a boy’s heart racing.

I waited five more years before I got my very own bike; it was a Japanese Honda, a far cry from Steve’s British classic. I lived in Dhaka then where I had just entered the first year in Norte Dame College. Honda and I explored the labyrinthine streets of the old Dhaka running along the Ganga (Ganges) known to the locals as Bhuri Ganga (Old Ganges). I can still walk down the memory lane and encounter those afternoon rides and the sights and sounds of that great city. A couple of years later I got a bigger and more powerful Honda, after I scored the grades that I had promised my dad. It was in Peshawar where I lived for the next four years going through engineering studies where Honda, nicknamed as Red Devil, and I had the most memorable experiences. I was still a boy and boys do boys things, memories of which become a treasure to the men they eventually become. I can still recall some of them and wear a smile. I will keep the details for another time.

I must confess that all of us, men, have our unique quirks when we step into our middle age. Some have affairs with the other women while some just replenish their wardrobe with colors that give enough reason for their wives and children to disown them. In my case, since no ‘other woman’ was interested in me I just rekindled the old flame in my life and bought myself a Triumph. When I say old flame I really mean OLD because it was manufactured in 1955 and for good many years had not seen a spark in its combustion chambers. Most of its body parts were either rusty or not there at all. I did not realize then that parts for such an old English bike with a very unfamiliar name among the Hondas, Yamahas, and Suzukis of today would be impossible to get. What to talk of parts, even getting a mechanic who knew anything about the old bikes was an arduous task.

After a massive search up and down the Lawrence road in Karachi I found Ijaz, who owned the corner shop behind the old Gandhi Garden. It was small, cramped with hordes of old rusty bikes and parts, usable and unusable. Oil stains, old wheels, and stimulating pictures of girl models adorned the walls that begged for a coat of paint. There were Triumphs, Indians, BSAs, Matchless, and even a BMW. Ijaz was one of a kind and he knew it. There was an air of arrogance about his mannerism. He wanted to look at the bike before he would accept the job of restoring the bike. Excitedly, I loaded the bike on a Suzuki pickup and was in front of his workshop in the afternoon. He walked around the bike assessing the condition and mentally noting what was missing and then looked me up and down as if gauging the qurbani ka bakra (sacrificial goat) before making the bid.

“Where did you get this”, Ijaz asked with a meaningful smirk.

“I bought it off a friend in Nazimabad”, I responded.

“Was this parked in the garage next to the old press building”, he enquired confidently.

‘Damn! He knows his old bikes’, I thought.

“Where are you going to get the parts to make this thing work? Do you know anyone in England?” I was already beginning to feel hapless. “Or maybe if you know anyone in Amritsar. They have a lot of parts, y’know, for Triumphs floating around in India”.

“I am afraid not”, I acknowledged.

He called his partner, Nadeem, to consult if they should accept this restoration challenge. “Bohat mushkil hai. Es men to kuch bhi nahin hai (very difficult, there is nothing in there to restore)”. The good cop bad cop game begins. Nadeem suggested that they give it a try since I was a “sharif admi (decent man)” and had already bought the gaarhi (bike) without thinking of the consequences.

My ignorance and vulnerability had been plied enough for a win-win outcome for the duo. This was understandable since the probability of finding a man with such oddity that can be had is one in a million. They gave me the estimate of the cost which was much higher than I had originally anticipated. My attempted negotiations were in vain as there was no way I could have found the parts for the contraption that I had been so excited about. I finally agreed with the token reduction in their fees and returned the next day with an advance amount.

The first few weeks I would make the one-hour detour at quitting time from work and visit the shop to see the progress. Each day, I would find nothing being done. Some days the shop would be locked up. Others I would find classic bike buffs talking about their prized possessions. Most of them owned more than one bike and were extra nice to this new kid on the block. I could see myself riding the TRW in the breezy boulevard by the Karachi beach.

Restoration was going on a snail’s pace. Parts had to be manufactured, hunted down from particular nooks of the city, or cannibalized from other old bikes. Failing all this, they were just modified. Finally, after four months of intermittent work the bike was ready in the metallic midnight blue with new chrome mufflers that had been locally made. I must add that the local mufflers had been artfully created to give out the original sound of the erstwhile Triumph of the fifties. For those of you who are not into bikes ought to know that the sound of the bike is so precious that Harley Davidson, the US manufacturer of the legendary bikes, filed a sound trademark for its distinctive “potato-potato-potato” sound.

Finally, the day I had been waiting for came and I was dropped by Kim, my wife, at Ijaz’s shop. I would ride my prize possession back through Sadder, Clifton, and Gizri to its new home. With peak testosterone levels, I was smiling proudly as I rode it out of the workshop. It was indeed a beauty because at almost each of the traffic lights where I stopped for the red light someone invariably asked me where I had gotten this classic. My ear to ear smile was not to last but only a couple of miles. Somewhere close to Metropole the Triumph, I was so triumphant about, gave a big bang and died out. All the kicking could not revive life into the old engine. What a let down. Nadeem was called; he came, tinkered around, and made it start again. Nadeem’s diagnosis, “You don’t know its temperament yet”.  He did have a point. Let me explain. For any of you who have ever had the honor of kick-starting a triumph would know that there are a few tricks; a) you should be wearing boots of military type – shoes or moccasins will not do, b) as you kick transfer the force from your thigh to the leg on to the crank, at a certain point in the arc an extra thrust is to be exerted –  knowing this point can only be learnt after you have toiled at it, c) immediately remove your foot away from the kick lest you want to be kicked back with the recoil – and it does hurt if you don’t. I learnt this last trick very quickly.

The first thing that I did upon reaching the house was to look for the camera to take pictures of this new toy that I had begun to love so much. That much I did.

Little did I know that it was just the beginning of my woes. A month went by with many a visits to Nadeem’s shop, his visits to my house, and long stays of the Triumph at the shop. I still did not truly learn the temperament of this machine. I would still, once a week on Sundays, somehow get the bike started and take it out for a spin along the beach. Of course, smiling from ear to ear. Sometimes my son would accompany me. A couple of times my wife went along not as much for a ride but out of jealously because I was spending far more time with the Triumph on Sundays. Trying to kick start it once a week after cleaning it to a sparkle did take some time.

I had the bike for a number of years, during which time came to know a lot of mechanics who claimed to know what they were doing but let me tell you with authority, “no body in the city knows Triumphs”. Nadeem still did more than others. I have lost touch with him. His shop is no longer there. Since the time I got the bike back after its first restoration it was gutted twice but I still hadn’t learnt its temperament. I came to know a few classic buffs who went through similar experiences each time they decided to restore a bike. 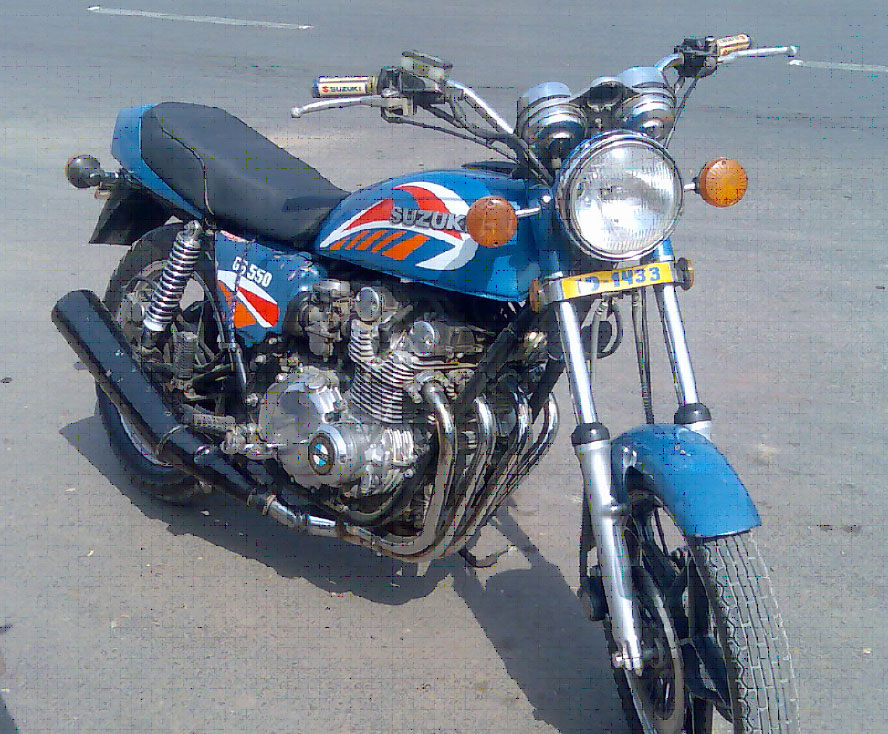 After four years of toiling with the Triumph I bought another old bike, though not as old as the Triumph, it was a Suzuki GS550 made in 1981. This was more reliable and predictable, no kick starting, it would start with a rev of an electronic starter. I would ride this on Sundays along the beach road in Karachi, some afternoons by myself and others with one of my son riding in the back.

I moved to Dubai a few years ago. Before moving I sold both the bikes. I do miss them and often think of buying another classic.

Then there is this Harley Davidson, V-Rod, a 1131 cc cruiser, packing 125 horses in its muscles for which Tim Allen, the tool man Taylor, from Home Improvement would grunt; UuuuuuuuAH! Aaaaaaarooh! Ooooooogh! It came to Dubai from the US, courtesy of a friend, helps me soothe my pangs for a blast to the past. Here it is: 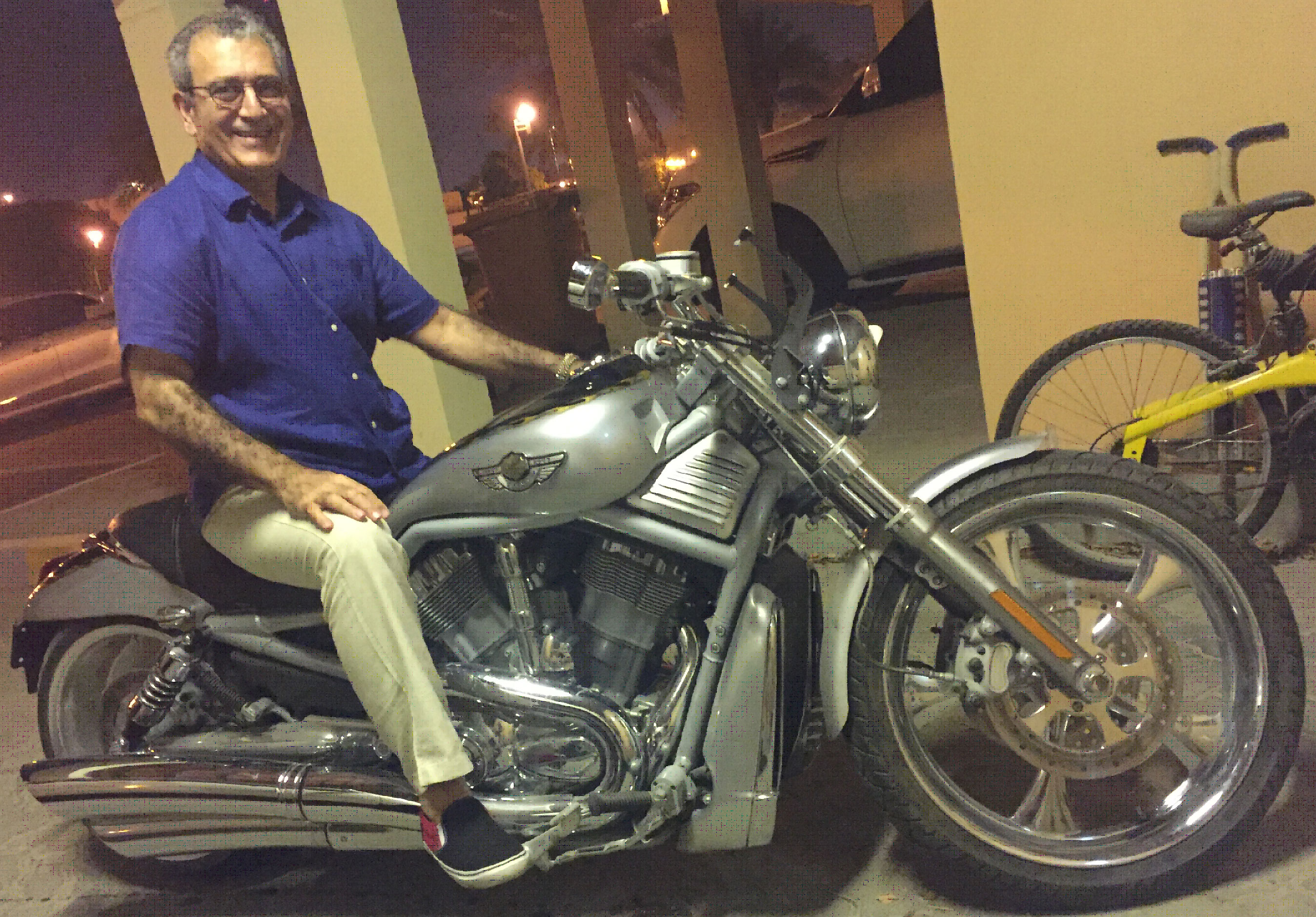 All I Have To Do Is Dream

My Quest For Happiness

Nice!…look forward to your stories about the ‘red devil’ or ‘James Das numbari’…BTW what does the title mean..?

Nice one Naveed mammo, that was fun to read.