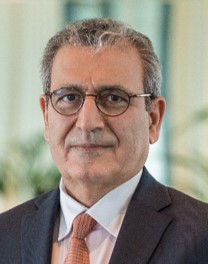 Neither very clever nor particularly gifted in any special way, Naveed is grateful for all the good things that have come his way.

When he was young he thought he would conquer the world. Soon after, he knew better and was happy with letting other people conquering it.

An engineer by education and training, he has been extremely lucky, found everything in life that he could hope for and then some; an ever-loving family – parents, children, wife, brothers, sister, nieces, nephews, uncles, cousins, etc., a big flock of true friends – ever-increasing in numbers from childhood to now, good health – not just good but great, and above all happiness – often elusive to most. He loves the outdoors and is a bona fide health nut.

His professional journey started as a classical engineer and somewhere along the way ventured into general management with some dabbling in social enterprises. In later years he became increasingly involved in the social sector; actively working to provide vocational training to youth and simultaneously supporting the training of children with learning problems. He has recently founded Fortify Education Foundation (FEF) that has set out to provide nutrition-sensitive meals for school children to help their mental and physical growth.

It has been fulfilling and eventful, to say the least. Like they say, ‘been there, done that’.